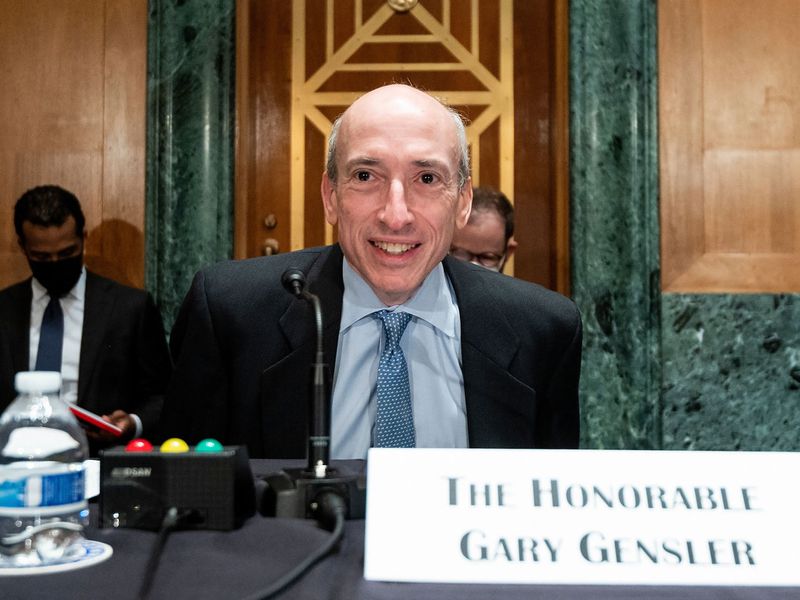 The crypto industry does not need any specific rulemaking for projects issuing tokens, Securities and Exchange Commission (SEC) Chairman Gary Gensler said in a speech Thursday.

Framing the issue as one of investor protection, Gensler said the rules and regulations that crypto issuers and service providers must abide by have been clear for years at the Practicing Law Institute’s SEC Speaks event.

“Nothing about the crypto markets is incompatible with the securities laws,” Gensler said. Investor protection is just as relevant, regardless of underlying technologies.”

Gensler also reiterated his view that “most crypto tokens are investment contracts” in his speech, and pointed to past SEC publications such as the DAO report and the Munchee order as guides that developers and entrepreneurs can and should follow.

“Some in the crypto industry have called for greater ‘guidance’ with respect to crypto tokens. For the past five years, though, the Commission has spoken with a pretty clear voice here,” Gensler said. “Chairman [Jay] Clayton often spoke to the applicability of the securities laws in the crypto space.”

“Not liking the message isn’t the same thing as not receiving it.”

Gensler echoed these remarks in an interview with CoinDesk previewing Thursday’s speech.

There are more than 10,000 cryptocurrencies listed on CoinMarketCap, with differing amounts of liquidity and value but all seeing similar approaches from the investing public, he said.

“[The public is] investing for a better future, based upon the efforts of others,” Gensler said. “There's websites you go to, there's Medium posts that you read, there's crypto Twitter, there's Reddit forums and places you can look for information. And it's about that common enterprise and that entrepreneurial effort, which is the hallmark of investment contracts, which are securities.”

Later in his speech, Gensler took aim at intermediaries in crypto, looking at both centralized and decentralized platforms.

“Crypto intermediaries – whether they call themselves centralized or decentralized (e.g., DeFi) – often are an amalgam of services that typically are separated from each other in the rest of the securities markets: exchange functions, broker-dealer functions, custodial and clearing functions, and lending functions,” he said in the speech.

These trading platforms should abide by rules that protect their users, Gensler said, noting that they operate order books and facilitate transacting in cryptos, which may be securities. This last aspect “makes them brokers.”

Gensler used attorneys hired to represent crypto entities as another example of how these projects may be in line with traditional securities platforms.

“We are a cop on the beat,” he said. “That’s what Congress set up in the 1930s, but we work with market participants and … quoting Joe Kennedy, the first chair of the SEC, ‘no honest business need fear the SEC.’”

In his speech, Gensler only briefly mentioned lending companies, saying they fall under his agency’s jurisdiction if they are offering securities.

He emphasized the possible dangers to investors in conversation with CoinDesk, noting that several have filed for bankruptcy and frozen customers’ access to their funds.

Even companies that haven’t filed for bankruptcy have still frozen user access to their funds, he said.

“There’s basic protections in our securities laws that guard against that,” he said. “If you're investing in any one of these, these service providers, platforms, you're not getting those basic protections insuring against fraud, manipulation, what's called front running.”

Gensler pointed to the SEC’s settlement with crypto lender BlockFi as an example of how companies could register with the agency, though he declined to speak about any other specific companies (noting he could speak about BlockFi as that is a settled matter).

The SEC is still sorting through the rest of the crypto lending space, he said, but in his view it’s “unambiguous” that lending platforms have to register with the agency.

Gensler’s chief message – that crypto activities are already covered by existing regulations, and do not need new laws or rules of their own – repeated throughout his speech.

Stablecoins – cryptocurrencies whose values are pegged to that of a real-world asset, such as the dollar – exemplified this, and are another area where investor protections are important, Gensler said in his speech.

Stablecoins may be securities, depending on how their peg is maintained, whether they pay interest and how they’re sold, Gensler said.

“This is by no means an exhaustive list. The point is, it is important to look at the facts and circumstances of a product, not its label, to determine whether it is a crypto security token, a crypto non-security token, or another instrument,” Gensler said in his speech.

He told CoinDesk that he intended to work with the Federal Reserve and the U.S. Treasury Department on this issue.

More broadly, he said he intends to work with companies and service providers but reiterated that he saw the SEC’s role as being “a vigorous cop” overseeing the crypto sector.

“If we're successful, there'll be more trust in these markets and investors will get to decide and entrepreneurs will decide and projects will win or lose or fail based on their inherent risk,” he said. “... We're going to continue to use the authorities Congress gave us but also the mandates to help best protect the public.”