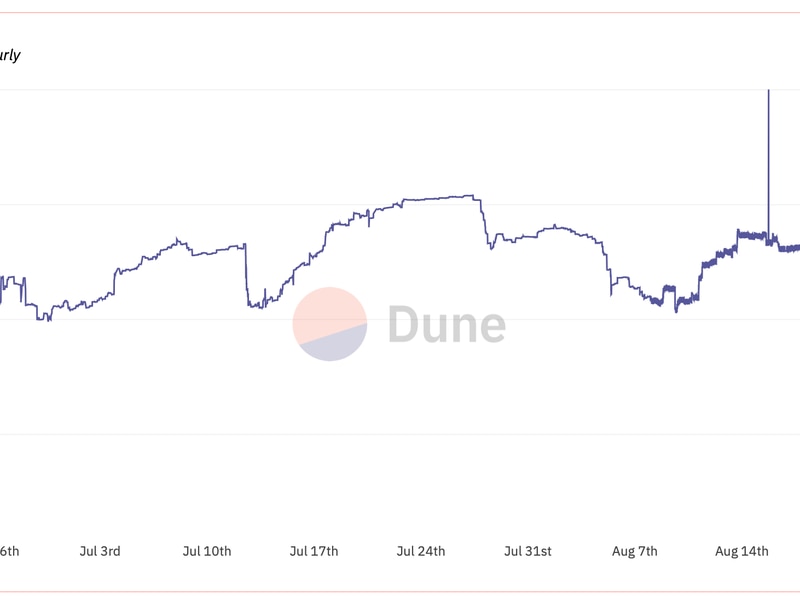 As Ethereum nears the Merge, the long-awaited technological change in the way it processes transactions, traders are deploying strategies to profit from the event, and their actions are injecting volatility into related markets.

In one such case, the discount between the price of liquid-staking protocol Lido's staked ether (stETH) and the price of ether (ETH) widened to 4.5% (or 0.954 ETH), the most since late June, according to data from Dune Analytics.

The discount partly stems from investors' concerns of missing the opportunity to gain a potential Ethereum forked token, ETHPOW, according to CK Cheung, an investment analyst at Defiance Capital.

While most of the Ethereum community favors switching to a proof-of-stake (PoS) consensus mechanism for validating transactions, some miners are looking to preserve the proof-of-work (PoW) mechanism. If they succeed, the chain will fork, splitting into PoS and PoW chains at the time of the Merge, scheduled for Sept. 13-15.

The latter would have ETHPOW as a native token, and ETH holders stand to receive it for free. Traders holding derivatives tied to ether or other ether-related tokens like stETH won't receive it.

That may have prompted stETH holders to sell their tokens in exchange for ether to position for a potential ETHPOW airdrop, or distribution. Each stETH token represents one staked ETH token and can be redeemed for ETH at some point after the Merge. However, stETH holders can swap their tokens for ETH on a decentralized exchange like Curve.

Aave recently closed the door for traders looking to borrow ETH ahead of the Merge on concerns the increased borrowing demand for ether would expose the decentralized lending and borrowing platform to liquidity issues.

Did I just wake up back in July?

Is the next leg down really going to be the exact same trade unwinding!?

Griffin Ardern, a volatility trader from crypto asset management firm Blofin, said the lack of clarity on what happens after the Merge could also be driving stETH holders to switch to ETH.

"ETH Merge may introduce additional uncertainty and risk, so holding ETH would be more appropriate than stETH. In addition, stETH is still in the pledge process and has not been unlocked," Ardern told CoinDesk.

"In a downward bear market, It is better to hold a spot [ether] than to hold a bond of the same face value," he said.

CoinDesk reached out to Lido for comment on the renewed widening of the stETH discount, and had not received a response by the press time.

stETH is not supposed to maintain a 1:1 ETH peg in the way stablecoins should with their external reference. However, the discount became a focal point of experts trying to monitor extreme stress in digital-asset markets following the collapse of algorithmic stablecoin Terra and Three Arrows Capital earlier this year.