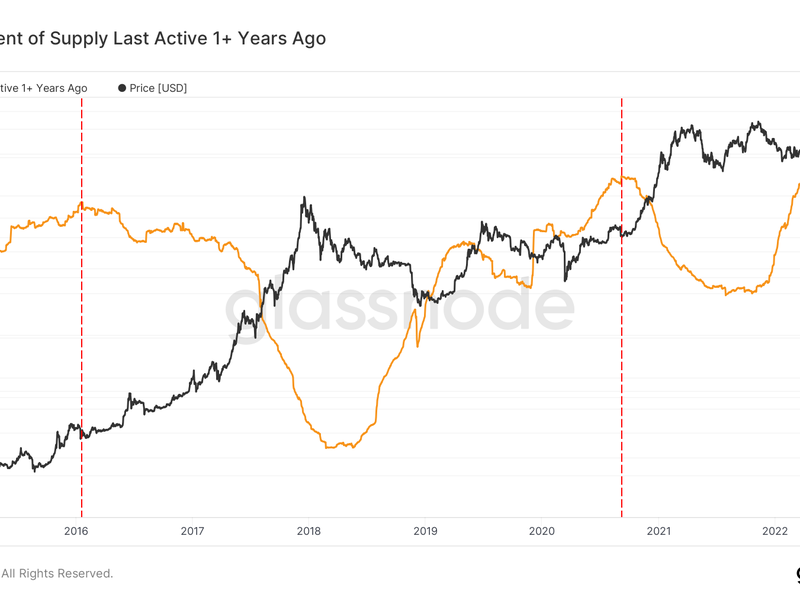 The view that bitcoin's (BTC) fate is closely tied to what the Federal Reserve (Fed) does has been widely discussed. As a result, most traders looking to time the next parabolic bull run are waiting for the world's most powerful central bank to declare victory over inflation and abandon liquidity tightening.

While the Fed decisions are undoubtedly important, indicators unrelated to macroeconomic factors and unique to the crypto market, like coin dormancy metrics, could be equally valuable in timing the next bull run.

Bhatia concluded that after noting bitcoin's tendency to chalk out sharp multi-month rallies after the percent of circulating supply inactive for at least a year has peaked.

At press time, the percent of bitcoin dormant for at least a year stood at a record 65.76%, according to data sourced from blockchain analytics firm Glassnode.

If history is a guide, bitcoin may see another meteoric rally once the metric has peaked.

"If two-thirds of bitcoin is off the market (not for sale) for an extremely long period of time, the price is driven up when more buyers enter the market bidding for a finite supply—a scenario that has played out in bitcoin twice before," Bhatia noted, adding that there are more unspent one-year plus old coins than ever before.

On-chain data has its own set of limitations and the metric in consideration doesn't take into account fast-growing bitcoin-linked trading vehicles like derivatives, tokenized bitcoin, exchange-traded funds, exchange-traded products and trusts. Coins locked in these alternative vehicles are still liquid or active, even if they don't appear to be in on-chain metrics.

Nevertheless, the relationship between inactive supply and price trends is noteworthy.

"Is this causal or circumstantial? We don’t know. But when data moves in inverse-tandem in previous cycles, it catches our eye and demands attention," Bhatia said.