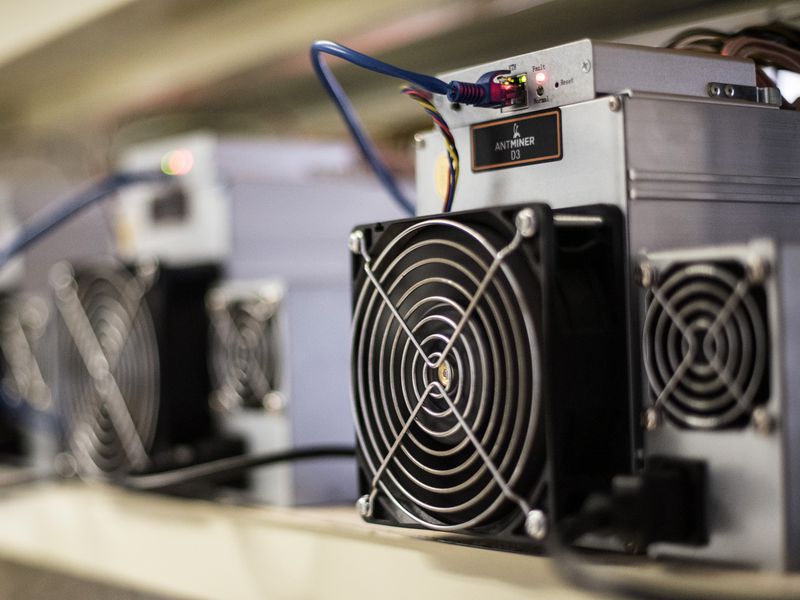 Insights: Some crypto miners are selling power capacity to offset the loss of revenue in the current bear market.

Bitcoin and Ether Remain in Their Recent Holding Patterns

A day before Jerome Powell's long-awaiting address at the Federal Reserve's conclave in Wyoming, bitcoin idled in roughly the same place it has held for much of the week – comfortably above $25,000.

The largest cryptocurrency by market value was recently trading at about $21,500, roughly flat over the past 24 hours as nervous investors continued their vigil for the U.S. central bank chair's comments Friday that might hint at the Fed's next interest rate hike. Several central bank governors talked to media outlets but offered few clues on whether the bank will continue its current hawkishness by approving another 75 basis point hike (which would likely send asset markets – crypto and traditional – spiraling) or ratchet back the rate to a more moderately aggressive 50 points.

"People are going to be looking for some sort of dovish tilt and if we don't get it, it could be kind of ugly," said Matthew Tuttle, CEO and chief investment officer of exchange-traded fund provider Total Capital Management.

Ether continued its recent pattern of outperforming bitcoin. The second-largest crypto in market capitalization was recently trading just below $1,700, up about a percentage point over the same period. Other major altcoins were mixed, with popular meme coin SHIB and CVC each recently rising more than 6% but EOS and KNC off over 2% and 1%, respectively.

Still, cryptocurrencies related to non-fungible tokens (NFT) and the metaverse have underperformed over the past week, a result of sagging sentiment about the NFT market. The Flow network’s FLOW token, which can be used to build NFTs and decentralized applications (dapps), slumped 20% during the past seven days. FLOW’s decline was the second largest during that period among 52 cryptocurrencies with a market cap over $1 billion, according to crypto data and analysis firm Messari.

Other NFT and metaverse-related tokens that have sunk include AXS, GALA, MANA and GMT, which all fell between 14% and 20%.

Equity indexes closed higher after the U.S. Commerce Department released data showing that the economy contracted at a lower rate in the second quarter than preliminary estimates indicated. The tech-focused Nasdaq, the S&P 500 and the Dow Jones Industrial Average (DJIA) all climbed at least one percent. Investors were also buoyed by a slight decline in jobless claims underscoring the continued resilience of the economy. Oanda senior market analyst Edward Moya called the most recent indicators "the perfect appetizer for Friday’s hawkish Fed Chair Powell speech."

Moya added that "there is still a chance that this unbalanced economy will get a soft landing and that should prevent stocks from seeing severe downward pressure."

In crypto industry news, Voyager Digital, the lender whose collapse into bankruptcy worsened this year’s crypto market crisis, is attracting takeover interest from some of the biggest players in the space including exchanges Binance and FTX, according to people familiar with the matter.

And Sam Bankman-Fried's FTX Ventures denied a Bloomberg report Thursday that the venture capital arm of FTX and the VC operations of sister company Alameda Research would be merging.

A Bear Market Survival Strategy for Some Crypto Miners

The continued bear market has battered crypto miners more than other companies as their main revenue comes from mining the digital assets. Now, miners may have found a different way to offset some of their losses – selling power back to the grid.

Crypto miners consume tremendous amounts of energy to mine their digital assets, and power cost is the main variable to their profit margins. With the price of bitcoin down more than 50% this year and power costs rising, their margins have shrunk significantly.

However, some miners are now actually getting paid to shut down operations and release electricity capacity back to the grid during peak demand periods, while lowering their power cost.

“The ability for some mining companies to either generate power to sell to the grid or perform demand-response gives them an additional profitability option,” said Ethan Vera, chief operating office of the full-stack bitcoin (BTC) mining software and services provider Luxor Tech.

Most recently, one of the largest bitcoin miners, Riot Blockchain (RIOT), said it earned an estimated $9.5 million in power credits by shuttering its mining operations in Texas during an extreme heat wave. The miner said it lowered its power cost significantly using this strategy.

Another bitcoin miner, Mawson Infrastructure (MIGI), said it generated $1.8 million in unaudited revenue by engaging in similar types of strategy as Riot. “When energy prices are low, Mawson engages in bitcoin mining and generates revenue by selling self-mined bitcoin daily, as it has from inception,” the miner said in a statement. “When energy prices are high, and where available, Mawson engages in Energy Demand Response Programs, receiving revenue and reducing overall energy costs,” it added.

One caveat to this strategy is that a miner must have a fixed-price purchasing power agreement, rather than buying electricity in the spot market. For example, Argo Blockchain (ARBK) said that unlike Riot, it wasn’t able to participate in demand response in Texas as it has been paying spot market prices, which have been higher in recent months.

However, miners who can take advantage of this strategy during summer's heat, could benefit significantly even as the bear market continues. “In the current environment mining economics have fallen, while energy prices have soared, making it an opportune time for these miners to sell power to the grid. In many cases miners can make over double per kWh by selling power rather than mining,” Luxor’s Vera said.

Bitcoin (BTC) and ether (ETH) traded sideways a day before Federal Reserve Chairman Jerome Powell's speech at Jackson Hole. Plus, "First Mover" had a conversation with The Sandbox co-founder Sebastien Borget about the future of the metaverse and Alpha Season 3.

Ether Leads Crypto Recovery on Merge Confirmation, but Traders Remain Cautious: Buying ether ahead of the Merge is likely an overextended play, one trader said.

Afghan Authorities Shut Down 16 Crypto Exchanges in One Week: Report: Police reportedly closed the exchanges and arrested their staff after Afghanistan's central bank stated that digital currency trading should be stopped, citing problems and scams.

BitBoy Lost His Lawsuit the Instant He Filed It: The YouTube cryptocurrency promoter is only drawing more attention to the pump and dump-filled oeuvre he'd rather suppress. (He has since decided to drop the defamation lawsuit.)

Today marks a new phase in the Collectible Avatars journey. One that may finally answer the question, “What are all these internet points good for?” Starting today, we will begin air-dropping Collectible Avatars to our top community builders… for free. To thank top karma earners for the contributions they've made to their Reddit communities, qualifying redditors will be able to choose from four distinct new styles of Collectible Avatars: Aww Friends. Drip Squad. Meme Team. The Singularity Keep an eye on your feed to see if you qualify, and find your avatar squad! (Reddit) ... this seems like a big misrepresentation to me! FTX has been doing more venture recently, and I guess maybe Alameda has been doing less? That's a really different thing than what the headline implies! (Sam Bankman-Fried)