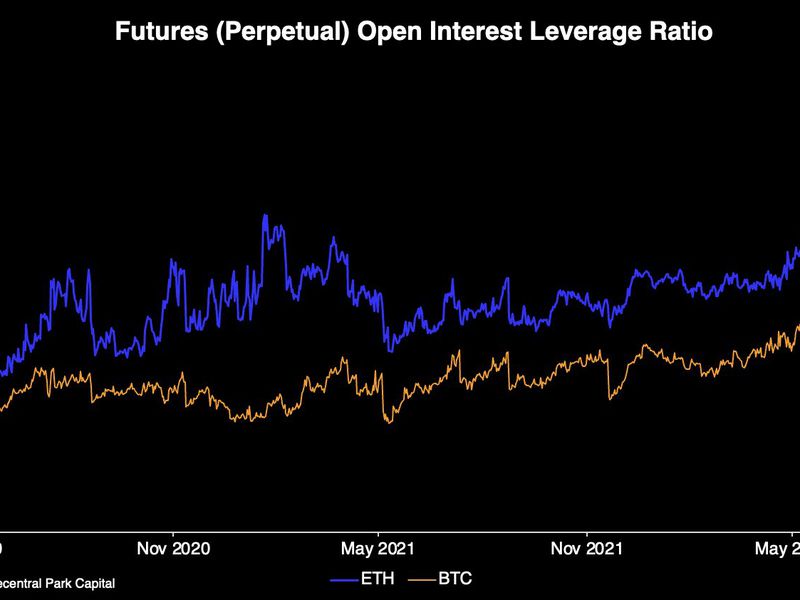 The metric is calculated by dividing the amount of dollars locked in open perpetual futures contracts by the market capitalization of the underlying cryptocurrency. The ratio represents the degree of leverage relative to the market size or sensitivity of the spot price to the derivative market activity.

Both ether and bitcoin's perpetual futures open interest ratios stood at lifetime highs above 0.03 and 0.02 at press time, according to data sourced from Decentral Park Capital and blockchain analytics firm Glassnode.

Perpetuals are futures with no expiry. A futures squeeze refers to a sudden and rapid move in an asset's price caused by bears or bulls abandoning their positions. A short squeeze is a rally fueled by sellers dumping their bearish bets (shorts). A long squeeze is a decline caused by bulls closing their bullish bets (longs). The higher the leverage ratio, the bigger the impact of long/short squeeze on the asset's price.

The futures market involves leverage, meaning a trader can take a large long/short position by depositing a relatively small amount of money, called a margin, while the exchange provides the rest of the trade value. That exposes futures traders to liquidations – forced closure of long/short positions due to margin shortages often caused by the market moving in the opposite direction of the trade.

These forced closures put upward/downward pressure on prices, leading to increased volatility. The greater the degree of leverage relative to the market size, the bigger the risk of liquidations injecting volatility into the market.

Other things being equal, the recent bearish positioning in the perpetual futures market suggests scope for a short-squeeze ahead. A short squeeze is caused by bears exiting short positions on the first evidence of price stability, which leads to a sharp rally.

"Aggregate funding rates turned moderately negative for both assets mid-August, so crowded shorts may be at most risk," Harland told CoinDesk.

Funding rates refer to the cost of holding long or short positions in the perpetual futures market. An aggregate negative funding rate means shorts are paying longs to keep the bearish bets open and the net positioning is skewed bearish.

Ether may be more volatile than bitcoin in the coming weeks, as the former's leverage ratio is bigger than the latter.

Besides, Ethereum's long-pending technological upgrade, dubbed the Merge, is due in mid-September. The upgrade is projected to cause a drastic reduction in ether's supply and bring a store of value appeal to the cryptocurrency.

Traders have employed various synthetic strategies that involve buying spot and selling futures in the lead up the merge, inadvertently setting the stage for price turbulence at the time of the merge.

"We note this risk could be relatively higher for ETH than BTC, given the ratio is ~38% higher [for ETH] and consensus merge momentum trades," Harland said.

Large ether options traders have been adopting an options trading strategy called a long strangle to profit from a potential volatility explosion in the coming weeks.