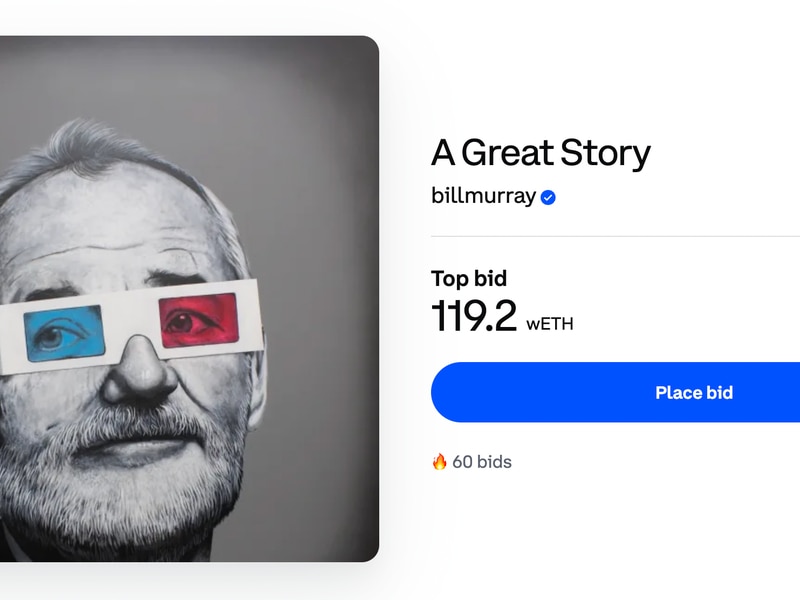 An NFT ticket to beer with actor Bill Murray sold for 119.2 ETH (around $185,000) on Wednesday in a charity auction-style bidding war.

The NFT is a 1/1 collectible part of the actor’s “Bill Murray 1000” collection, created by The Chive in partnership with Coinbase’s non-fungible token (NFT) marketplace. Only 82 of the 1000 NFTs from the collection have so far been released (only the 1/1 comes with beer utility), with the cheapest edition to purchase on Coinbase’s marketplace listed for 11 ETH, or around $17,000.

The auction drew up a bidding war between six different JPEG collectors, garnering 60 bids before Coinbase user Brant Boersma came out on top.

Brant Boersma will have their date with the actor immortalized on canvas along with the blockchain. David Grizzle, the artist behind the collection, will be in attendance to paint a portrait of Brant Boersma and Murray together while they have their beer, which the holder gets to keep.

“I wasn't sure what to think as I’m generally new to NFTs,” Grizzle said of the sale to CoinDesk. “I launched some of my collections on OpenSea earlier this year so everything that’s happening right now is just amazing.”

NFTs from the collection each include never-before-heard anecdotes and stories from Murray, according to the project’s website. The

While Murray doesn’t appear to be much of a technologist, his NFT collection isn’t shabby. The “Groundhog’s Day” actor owns NFTs from top collections like CryptoPunks, Cool Cats, Deadfellas and LinksDAO.

Murray’s team will donate proceeds from the sale to Chive Charities, a non-profit that serves families of veterans and first responders, a Coinbase representative told CoinDesk.

Indian cryptocurrency exchange WazirX has said "allegations made by Binance in their blog are false and unsubstantiated" and that with respect to Binance's actions, it is taking the necessary steps to seek recourse and protect its legal rights, a...
Policy