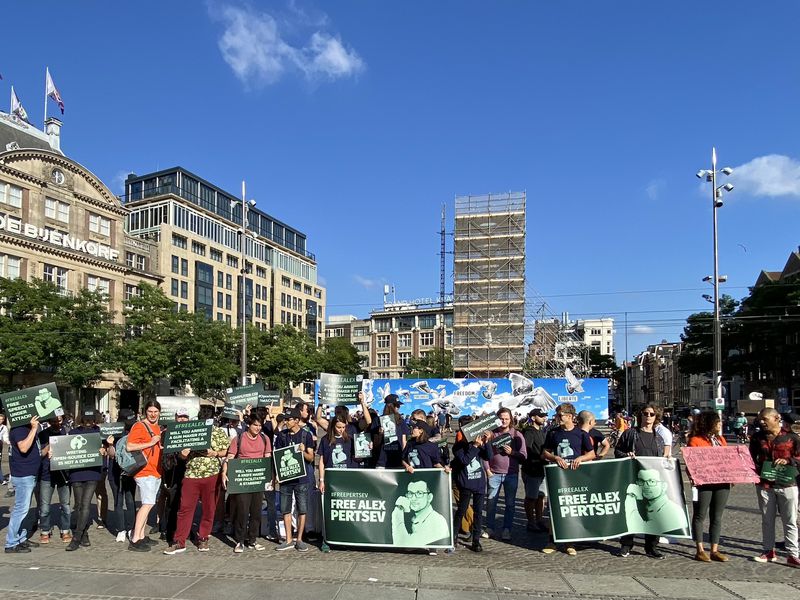 More than 50 people gathered in Amsterdam's Dam Square on Saturday to protest the arrest of blockchain developer Alexey Pertsev, who was was arrested Aug. 10 and is suspected of involvement in the Tornado Cash protocol that was sanctioned earlier this month by U.S. authorities.

The protestors, who included Pertsev’s wife Xenia Malik, waved placards demanding his release and chanted “open source [code] is not a crime.”

The 29-year-old was held just two days after the U.S Treasury froze Tornado, a virtual-currency mixer it said was used by North Korean hackers. After an Aug. 12 closed-door hearing, an examining judge agreed to keep him in custody for two weeks. A press release issued by Dutch financial crime authority FIOD said the arrest was on suspicion of “involvement in concealing criminal financial flows and facilitating money laundering” through the service, which can obfuscate the source and destination of funds that pass through it.

While the system can be used to bury criminal proceeds, it also has legitimate applications. Pertsev has yet to be charged with wrongdoing, so the demonstrators were reluctant to comment on legal issues. Many, however, worry about what Pertsev's arrest means for the future of Web3 and are conscious of a chilling effect on the Netherlands’ blockchain ecosystem.

“It’s a case where the fundamental principle of crypto is being questioned,” Roman Buzko of law firm Buzko Krasnov told CoinDesk at the demonstration. The case concerns “whether code is an expression of free speech. In my view, it is.”

In the U.S., code is deemed protected under the First Amendment to the country's constitution, but that's a notion still being tested in Europe.

FIOD also said that those behind decentralized autonomous organizations (DAO), the loose structures that govern many Web3 projects, “have made large-scale profits” from criminal flows, though it is not clear if they consider Pertsev to have been involved.

The FIOD statement is “more FUD, more fear, uncertainty and doubt, coming from Dutch regulators and from Dutch institutions. It’s not good,” she said. Blanc is the founder of cryptocanal.org, a Web3 events and consultancy company. “Let’s stay competitive, let’s have clear laws … this creates uncertainty.”

Others say authorities should really be focused on holding accountable those responsible for debacles such as the recent crash of terraUSD.

“Alex is just a developer. They should be going after the true criminals,” said protestor and Web3 developer Naomi Schettini. Pertsev is “not responsible for criminals using his code for doing illicit activity. That’s like saying the inventor of the knife is responsible for murders. It’s truly ridiculous.”

The arrest could have implications for those in other areas of web development, said Rodrigo Zapata, a project manager in a blockchain-based biodiversity company.

It is “the equivalent to put someone in jail that codes Linux because some hackers somewhere in some country are using it for hacking some government systems,” Zapata told CoinDesk. “It's just ridiculous and out of proportion.”

Laws, he said, need to be updated for the open-source era. “Public authorities are overstepping what is supposed to be done by the legislators, and not by executive power.”

Whether the authorities will take notice is a different matter. While the gathering was one of the larger groups in the square wedged between the Royal Palace and Wax Museum in the heart of the capital, the #FreeAlex protestors jostled with Evangelical Christians, Satanists and performance artists dressed as Death and Jack Sparrow.

Among the other signs seeking attention: “Boycott Israel,” “Hands off Cuba,” “Jesus was Black,” "Stop organ harvesting from Falun Gong" and "Democracy is back in Bolivia.”

Both FIOD and and the Dutch public prosecutor declined to comment when approached by CoinDesk before the demonstration.