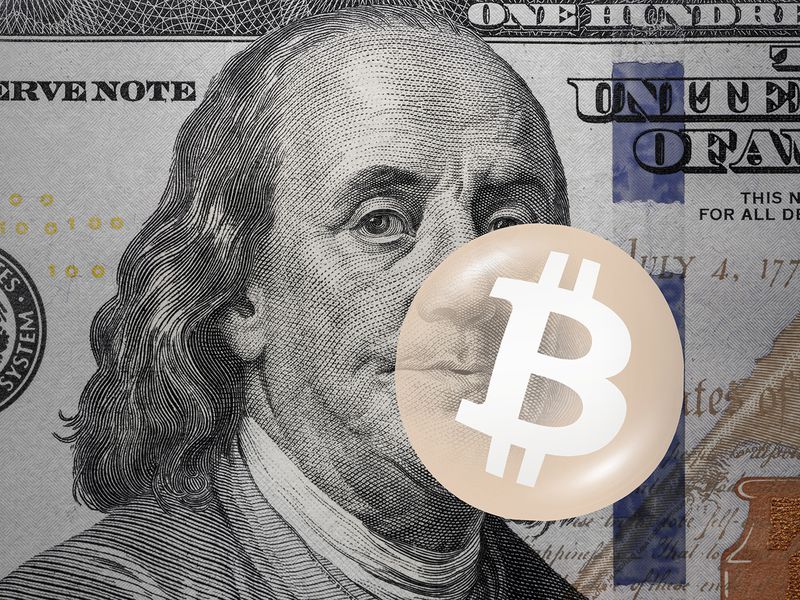 For the first week in a while, the non-crypto world was louder than the crypto world.

Everyone is talking about:

First off, the U.S. government isn’t paying off everyone's student loans. What the Biden administration announced was that people who both hold federal government student loans and earn less than $125,000 a year will have either $10,000 or $20,000 of their student loan balance forgiven. There are nitty-gritty details (which you can get by listening to this NASFAA podcast), but the main question we want to answer is if this is inflationary or not.

Here’s an argument that it will be: Canceling student loan debt will put money in the pockets of Americans and those Americans will use that money to buy more immediately. The immediate consumption bump will meaningfully contribute to more inflation.

Here’s an argument that it will not be: Canceling student loan debt will leave money in the pockets of Americans and those Americans will use that money to consume more gradually over the course of their lives. The gradual consumption bump won’t meaningfully contribute to more inflation.

I very much like the argument that canceling student debt won’t be immediately inflationary. Yes, the coronavirus pandemic stimulus checks were, but there is an important psychological difference between handing someone a $3,200 check and handing them an official letter saying they owe $10,000 less on an outstanding loan.

No, probably not. Probably the opposite. While the White House introduced a program that isn’t obviously inflationary on the surface, the Federal Reserve chair is still digging deep for his Volcker (without going full Volcker) moment. When Powell faced central bankers, economists and the American people Friday morning with his prepared remarks in Jackson, Wyoming, he said that “history cautions against prematurely loosening policy,” which basically means, “We’re going to stay the course because if we change course again, you’re really not going to believe us anymore.”

Powell (and the Fed) is also digging deep for credibility. CoinDesk’s Adam B. Levine, host of the ”Markets Daily” podcast, made one of the best arguments for that in last week’s episode where he said:

“... [H]istory suggests that the [Fed’s] decision [on interest rates] will remain far below the [necessary] interest rate which is required to deal with inflation. For much of the 1970s and 1980s, the last time we saw comparable price inflation, the rate that the Fed set was somewhere between 8% [and] 20%, many times higher than what the Fed is suggesting now. So while central banks and markets will play games with each other, it may all be for show to look serious about the problem when the proposed solution doesn’t really have a chance to solve anything.”

What Adam Levine is using to make that assertion is the Taylor rule, a rule of thumb used by central banks to set interest rates at a level that will effectively combat inflation. By his estimation, the Taylor rule suggests that rates need to be >9% to even begin to deal with the behavioral changes long-term rising inflation leads to. I tend to agree with Levine and don’t think that the markets believe policymakers anymore.

Pozsar makes it clear in the aforementioned research note that he thinks so. I think the note is worth reading in full, but here is a summary in case you don’t read it:

Supply is outpacing demand because we went from a world where a) cheap immigrant labor in the U.S., b) cheap goods from China and c) cheap Russian gas propped up low inflation to a world where a) nativist immigration policies drove wage pressures in the U.S., b) China’s zero-COVID-19 policy hurt the flow of cheap goods and c) a Russian war in Ukraine has led to skyrocketing gas prices in Europe prop up high inflation.

“Welcome to the war economy …

… where heads of state matter more than heads of central banks.”

Can bitcoin save us?

OK – we didn’t solve inflation last week, so now onto crypto’s preeminent inflation hedge: bitcoin. With inflationary forces still out there, investors are thinking about how best to protect themselves. Is bitcoin a way to do that?

There are two threads worth following here.

First, maybe inflation isn’t about the price of goods increasing, it’s about currency debasement. Some variation of this chart is pretty popular in bitcoin circles: 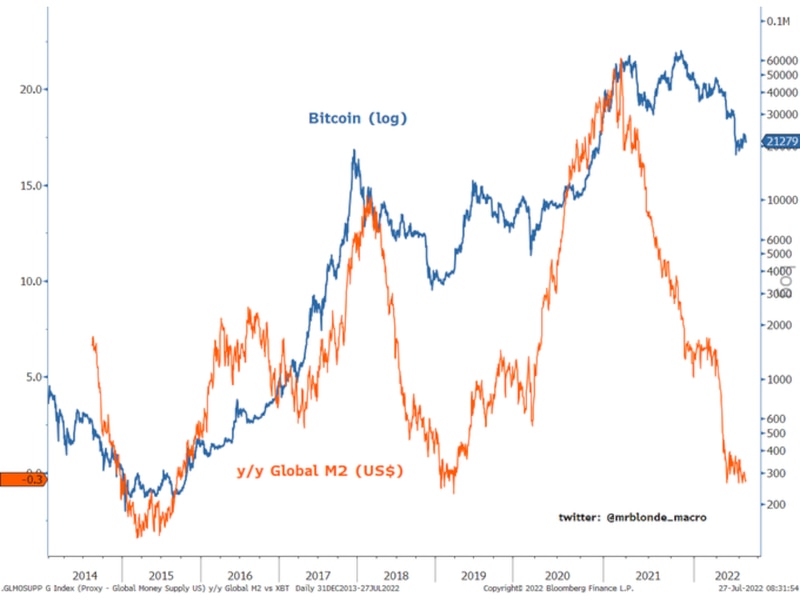 I’m not sure the data strongly supports this idea. Sure, there’s a visual relationship in the previous chart, but the rolling 30-month correlation coefficient between U.S. M2 and bitcoin’s value moves from negative to slightly positive (see the two following charts). Statistically, this doesn’t really tell you anything. Maybe the move is due to bitcoin maturing over time as it approaches its final resting place as an inflation hedge? I know the U.S. doesn’t stand in for the entire world economy, but still. 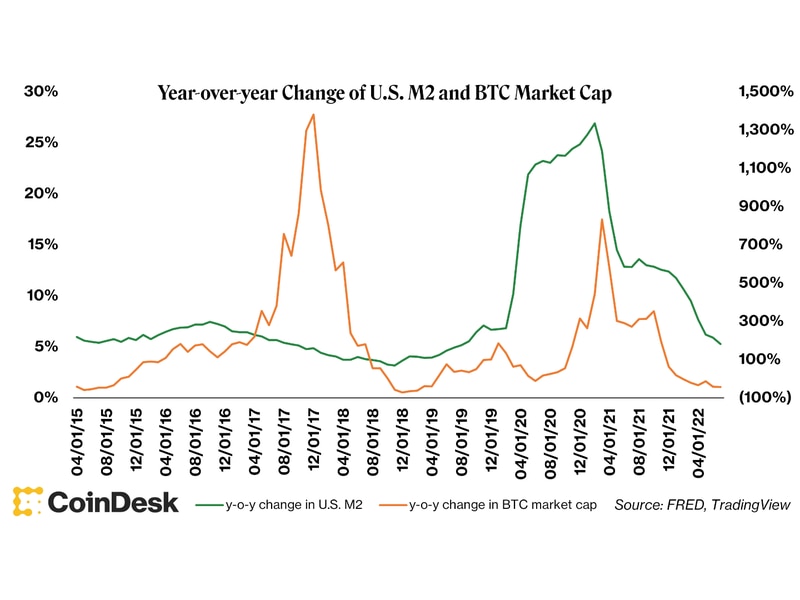 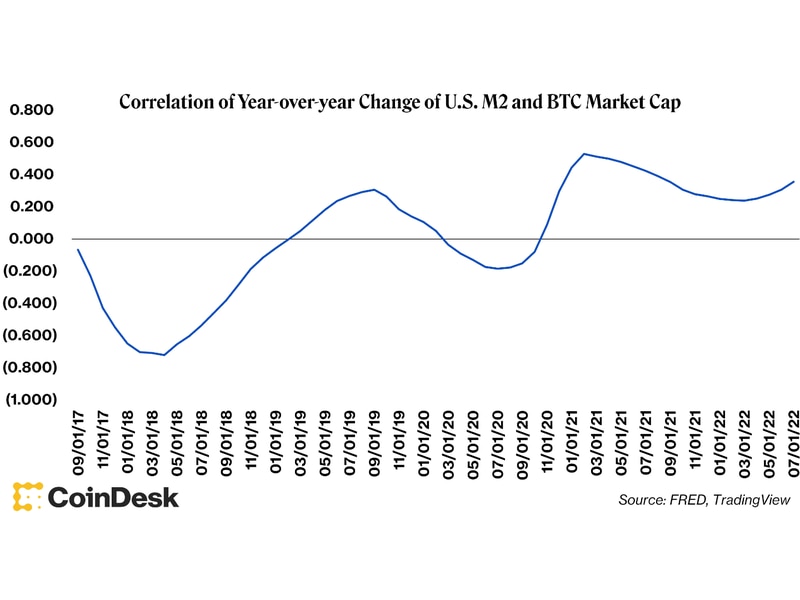 Second, and more concretely, if you agree that we are in a war economy “where heads of state matter more than heads of central banks,” bitcoin is probably investable simply because it is separate from the “heads of state.” I’m not saying bitcoin’s price is immune to the acts of heads of state, but I am saying that bitcoin isn’t issued by any country and that the broader network a) doesn’t need any particular country and b) is resilient enough to buck China banning it.