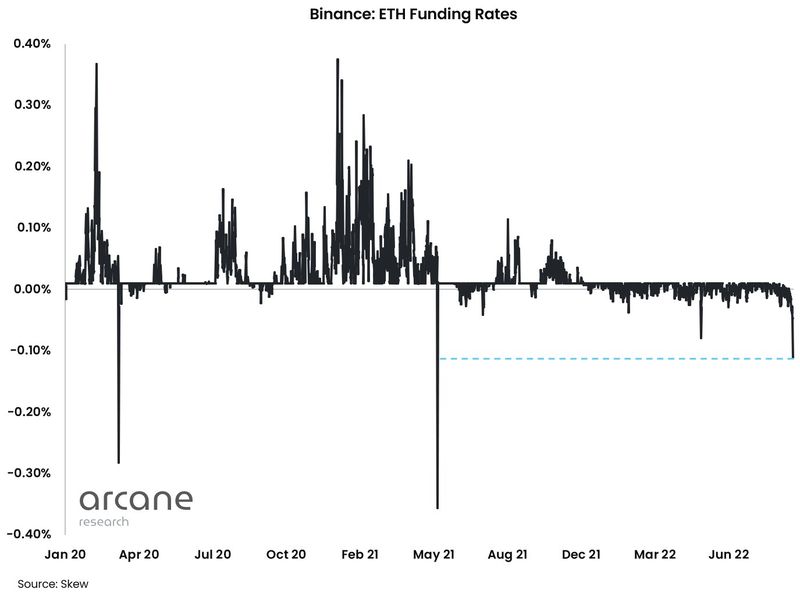 The cost of holding a short position or a bearish bet in the perpetual futures market tied to ether (ETH) is surging ahead of Ethereum's technological upgrade, the Merge, slated to happen in less than 24 hours.

Early Wednesday, the funding rate or cost of holding bullish/bearish (long/short) bets in the ether perpetual futures listed on the leading crypto exchange Binance was at its most negative since May 2021, as seen in the featured image. The average funding rate across major exchanges, including Binance, fell to record lows, according to data tracked by Coinalyze.

In other words, the compensation paid by shorts to longs to keep their positions open has spiked and reached the highest level in 16 months on Binance, reflecting excessive demand for bets on potential price declines.

Charged every eight hours, the funding rate helps keep the perpetual futures prices in sync with the underlying asset's price in the spot market. Perpetuals are futures contracts with no expiry, allowing traders to bypass the so-called rollover costs incurred in the regular futures market while switching from the front-month contract to the next month's contract at the time of settlement.

The ETH shorts have become expensive, seemingly due to traders deploying a bevy of strategies to profit from and protect against volatility that might stem from the impending change in the way Ethereum blockchain verifies transactions.

"Some traders appear to hedge their [bullish spot market] exposure in case there are any technical issues with the Merge and/or in expectations that there will be a large profit taking by long positions into the event," Markus Thielen, chief investment officer at British Virgin Islands-based IDEG Asset Management, said.

While the probability of the Merge failing is relatively low, ether's price could drop after the upgrade for two reasons. Firstly, ether has gained nearly 55% in the two months leading up to the Merge in a classic "buy-the-rumor" type move. So some profit taking may be seen after the Merge. Further, ether may not immediately become a deflationary currency with depreciating supply after the Merge, disappointing those positioned for the supposedly-bullish effect to kick in right away. Another reason for shorts becoming too expensive is increased interest in selling perpetual futures and regular futures against long positions in the spot market. The so-called market-neutral trade, which would allow ETH holders to collect potential Ethereum fork token ETHPOW for free while bypassing risks from ether price volatility, has been quite popular among traders since early August.

"ETH funding rates have been persistently negative for over a month now, likely as a result of investors hedging their risk exposure to ETH by going short perpetual futures," analysts at Paris-based Kaiko wrote in the weekly newsletter, explaining the growing divergence between ETH and BTC funding rates.

Extreme bearish positioning, as represented by elevated fees to hold shorts, might pave the way for a short squeeze – a sudden and rapid spike due to traders unwinding their bearish bets.

The funding rate is essentially the cost of leverage and becomes a burden when the market moves against expectations, forcing traders to liquidate their positions.

Should ether remain flat or bounce after the Merge, traders holding shorts may square off their bets, pushing ether higher.

"The short bias of these trades leaves the market primed for a potential short squeeze, something which we have seen follow the last three times funding has been deeply negative," analysts at Kaiko noted. 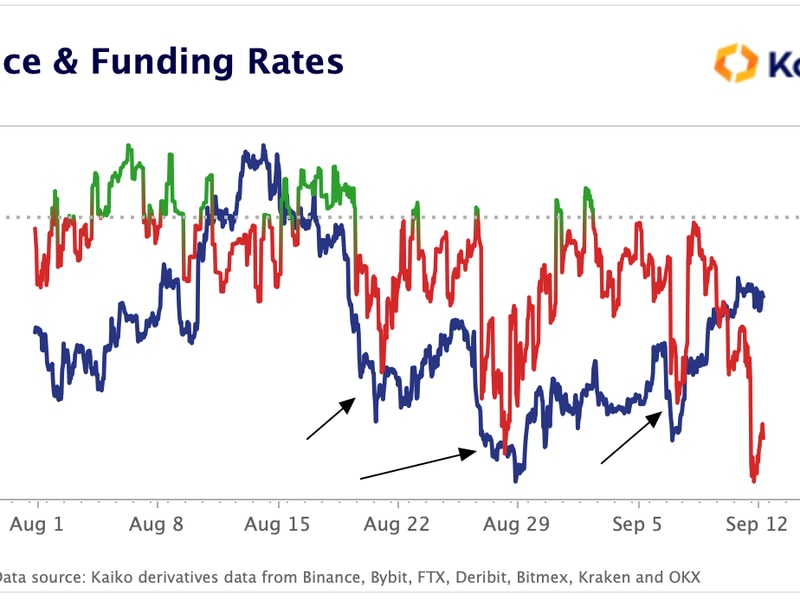