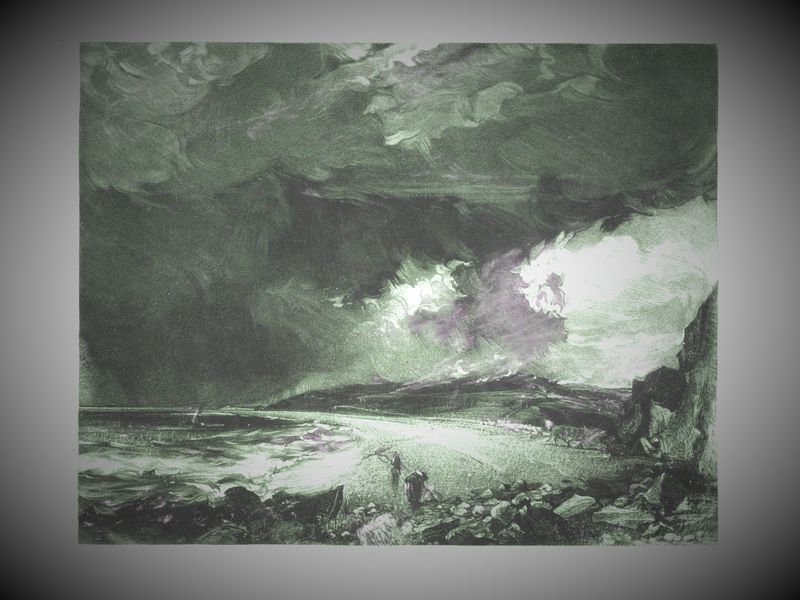 Bitcoin (BTC) was trading flat on the day at around $19,700. The world’s largest cryptocurrency by market value hit lows of $19,400 over the weekend after witnessing a short uptick on Friday following the U.S. jobs report.

As BTC is trading below the crucial support level of $20,000, a significant break at this point could be really damaging, according to analyst Craig Erlam at OANDA.

“The following key level below here would be the June lows of around $17,500,” said Erlam in a morning markets note. “Considering the outlook for risk appetite in the near term, it's not looking good.”

Ether (ETH), which has performed slightly better than bitcoin over the last few weeks, was up 1% over the last 24 hours. The network’s much anticipated Merge is just over a week away. For altcoins, Polkadot was up 4% and Chainlink was up 3.7%.

In traditional markets, gas prices surged and the euro and pound slumped after Russia shut down gas flows through the main Nord Stream 1 pipeline to Germany. The decision has created more uncertainty in Europe going into the winter months. The Stoxx Europe 600 Index fell 1.1%. Traditional markets in the U.S. were mostly closed in observance of the Labor Day holiday.

In the news, the Nigerian Export Processing Zones Authority (NEPZA) is in discussions with crypto exchange Binance over plans to create a virtual free zone focusing on blockchain and the digital economy.

Unusual blockchain data showed 10,000 BTC, worth more than $200 million, were moved in two transactions in the last week.

And, Poolin, one of the world's largest bitcoin mining pools, sought to assure users their funds are safe while acknowledging it is facing liquidity problems. Users have been complaining about issues with withdrawals from their wallets since at least August.

Ether Derivatives Markets Continue to Heat Up Ahead of the Merge

Ether (ETH), the second largest cryptocurrency by market value, looked set for renewed price rally ahead of the Ethereum "Merge," according to observers tracking chart patterns.

Last week, the native token of Ethereum's blockchain broke out of a falling wedge pattern identified by two converging and descending trendlines connecting Aug. 14 and Aug. 25 highs and lows hit on Aug. 10, Aug. 20 and Aug. 28.

"The formation is solid confirmation that ETH could go up in September more than anybody thinks," Bill Noble, chief technical analyst at cryptocurrency research company Token Metrics told CoinDesk, when asked what the wedge breakout indicates.

Ether's wedge breakout indicates the correction from the Aug. 14 high of $2,000 has ended and the uptrend from the June 13 low of $1,000 is likely to resume. 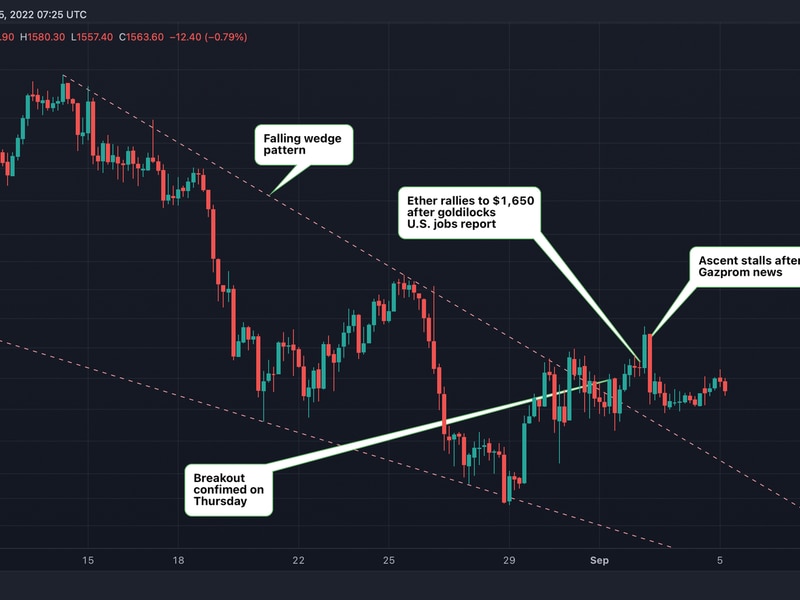 Prices doubled in the four weeks to Aug. 14 as equity markets regained poise and Ethereum developer Tim Beiko hinted at Sept. 19 as the deadline for the long-awaited Ethereum Merge – the technological upgrade that will transform the smart contract platform to a proof-of-stake network. The overhaul is likely to cause a drastic reduction in ETH supply and bring a store of value appeal to the cryptocurrency.

The Merge is slated to happen sometime around Sept. 15.

The "falling wedge" pattern begins wide at the top and contracts as prices move lower, causing the two descending trend lines to converge as the pattern matures. The converging nature of trend lines represents shallower lows, a sign of decreasing selling pressure. Therefore, a breakout is taken to mean a bullish revival.

Ether exited the falling wedge on Thursday, setting the stage for a pre-Merge rally.

"Ether has broken out of a falling wedge," Lewis Harland, a researcher at Decentral Park Capital, said. "A move above $1,700 would add conviction in the bullish momentum heading into the Merge." 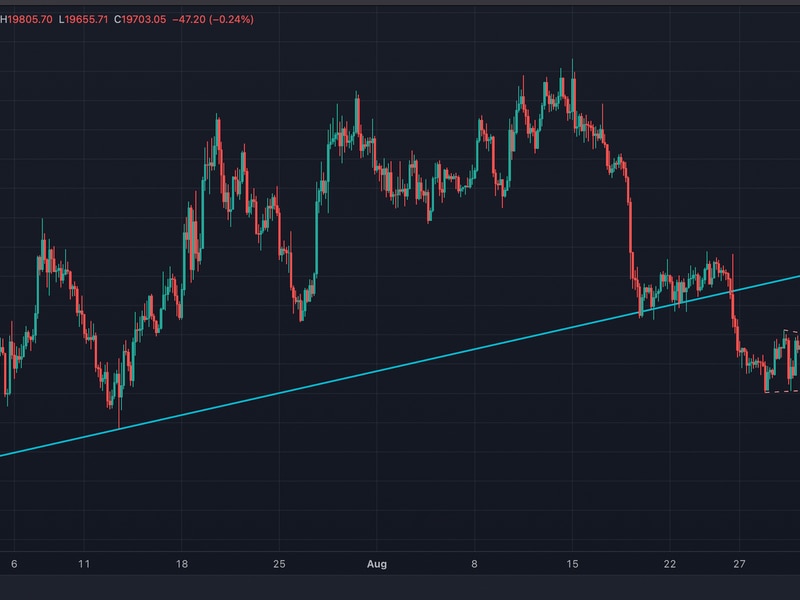