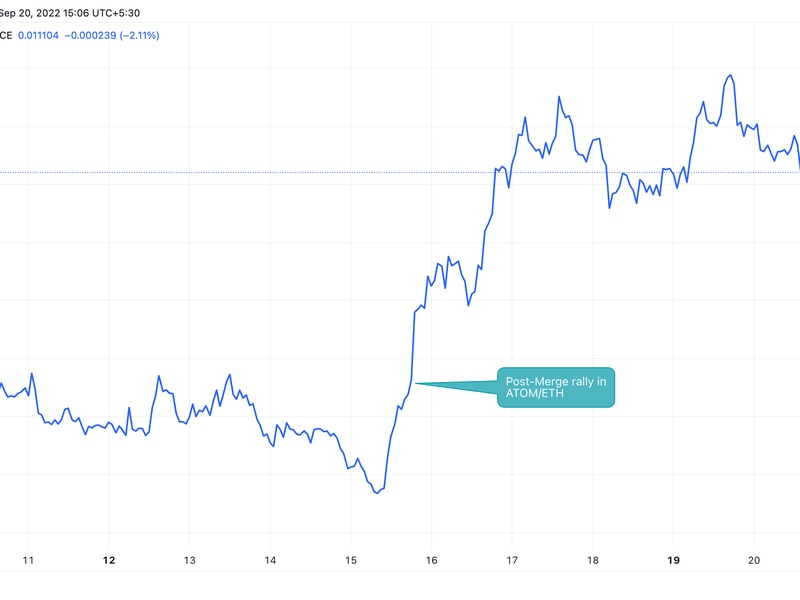 Investors starved for bullish catalysts seem to be parking their money in ATOM, the native coin of Cosmos Hub, the blockchain acting as an intermediary between all independent blockchains created within the Cosmos network.

Observers say they are doing so in expectation that a Sept. 26 conference will see the announcement of additional uses for the token and better security for the network.

ATOM has risen 10% to $15.3 since Thursday, bucking the broader market weakness caused by the "sell-the-fact" response to the successful implementation of Ethereum's technological upgrade, the Merge, according to CoinDesk data. The token's ether and bitcoin-denominated prices have increased by 32% and 14%, respectively.

"The market is looking for assets with a catalyst right now and ATOM happens to have one, which is why it is outperforming," said Katie Talati, director of research at Arca. "Cosmos is holding its annual conference next week, where it is expected to release a tokenomics white paper detailing more use cases for ATOM."

"Some potential announcements could relate to the release of interchain security, a feature that allows projects to rely on the Cosmos basechain for their security, which might increase the usage and staking of ATOM," Talati said.

Cosmos is expected to announce the most anticipated feature, interchain security, at the annual Cosmoverse conference in Medellin, Colombia.

Let's focus on what #Atom 2.0 ( new whitepaper) will bring to delegators, validators, and The Interchain!

Let's not make this Cosmoverse event buy-sell news!#Cosmonauts should explore the new whitepaper and spread awareness of it!

The interchain security feature will make Comos Hub responsible for network-wide security and enable ATOM to be used to secure all blockchains in the network.

Under that plan, the proof-of-stake Cosmos Hub blockchain would lease its ATOM-token backed validators to budding chains. That would allow every blockchain, or zone, in the Cosmos network to share security using ATOM instead of their respective native tokens. Currently, chains are forced to either pay high inflationary token rewards to validators or face the risk of hacker attacks on their chains.

The move would allow ATOM to derive value from the entire ecosystem and add a new use for the token. As of now, it can be used for staking, holding, and spending. ATOM stakers get the right to vote on network upgrades and receive rewards proportional to the number of coins staked.

According to Emperor Osmo, a writer from Cosmos-based automated market maker Osmosis, interchain security could lead to reduced supply of ATOM, as stakers will receive multiple staking rewards from every chain using the share security feature. That, in turn, could boost staking, sucking out coins from the market.

"As more chains enable interchain security [by using ATOM], more rewards are given to stakers," Osmo tweeted. "The more ATOM is staked, the less ATOM there is in the market."

Sticks in a bundle can't be broken

An old saying says, "Sticks in a bundle can't be broken, but sticks taken singly can be easily broken."

The interchain security feature will essentially bundle all Cosmos blockchains from a security point of view, making it harder for malicious entities to launch an attack.

"The Cosmos Hub has 175 validators who collectively have 193 million ATOM tokens staked, worth just north of $2 billion," VanEck's research team, headed by Matthew Sigel, wrote in a market insights post last month. "An attacker who wants to attack the Cosmos Hub economically will need to spend much more than this figure to hack the Cosmos Hub and its hosted blockchains."

VanEck is bullish on ATOM. "Based on our discounted cash flow analysis of potential Comos ecosystem value in 2030, we arrived at a $140 price target for the ATOM token with downside to $1," VanECK's research team noted.

Still, ATOM is an inflationary cryptocurrency with an appreciating supply, which may hinder potential price appreciation.

According to data source Messari, ATOM's current annual inflation is 5.74%. According to VanEck, inflation under the current economic model is targeted roughly at 13%, which may be "too high to sustain strong token price appreciation over the long term."

The conference is likely to address the issue.

It seems that $ATOM is position itself as the store of value and governance asset for the whole Cosmos space.

A major topic to solve to achieve this: adjust the inflationary yield.

Rumors indicate, that the new tokenomics, $ATOM 2.0, tackle this head on.

"It is widely expected that the team will soon announce new tokenomics for ATOM that will reduce inflation," Kaiko's weekly newsletter published Monday said.

The newsletter added that Cosmos and ATOM have benefited from several protocols leaving Terra after its implosion and relaunching on Cosmos.