It Was Cruel Summer for the Bitcoin Market 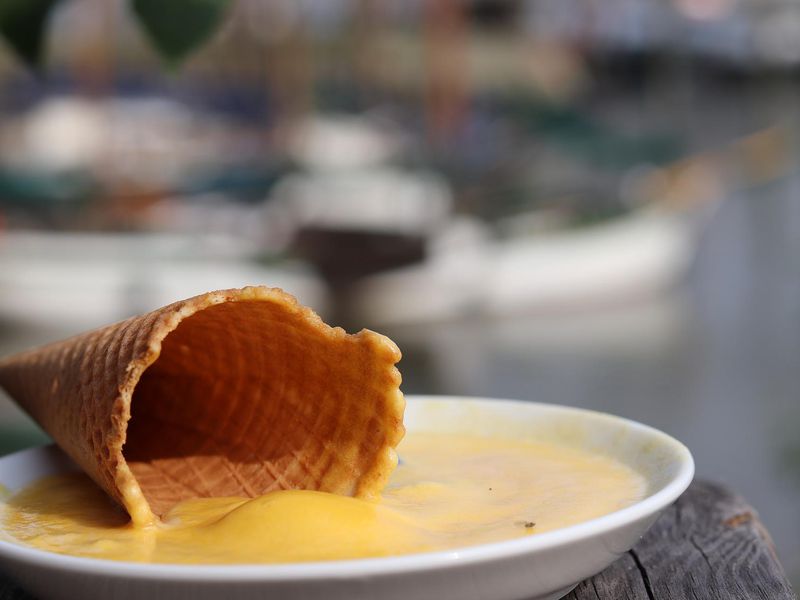 It’s Labor Day weekend, which means that summer is over. No, I do not care that the autumn season hasn’t officially started; summer is over when August is over.

Anyway, the finance world is usually slow in August since that’s when Wall Street’s finest unwind by doing work by the dim light of their mobile phones in the Hamptons instead of by the bright light of their offices in the Financial District. Now bitcoin, not to be upstaged, thought it would be best to buck that trend entirely by effectively erasing all of July’s price gains in August.

So let’s talk about summer markets.

First, let’s let summer mean from the start of June to the end of August. If you look at bitcoin’s last two monthly candles, they look like mirror images of each other, with July’s green and August’s red (see below). 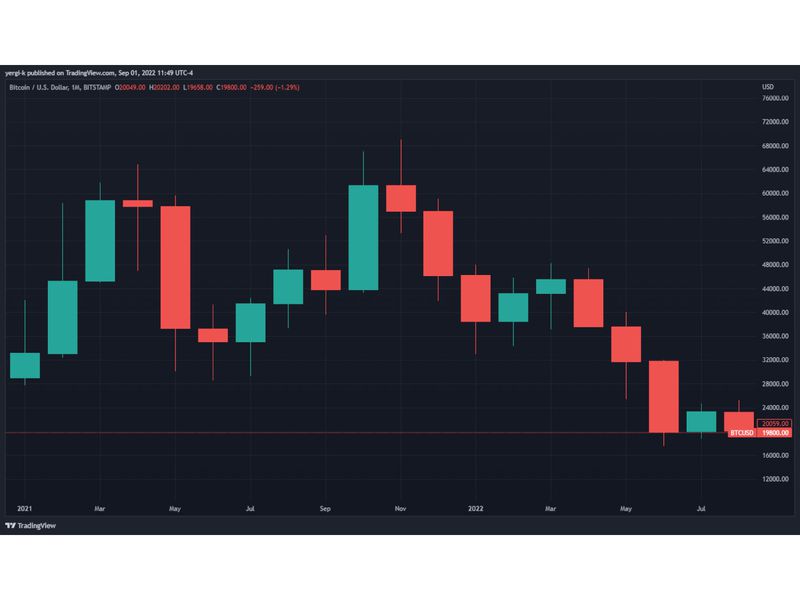 But an interesting fact pattern appears when looking at these summers: Bitcoin hadn’t had a negative summer since 2018 and the S&P 500 hadn’t had one since 2015. 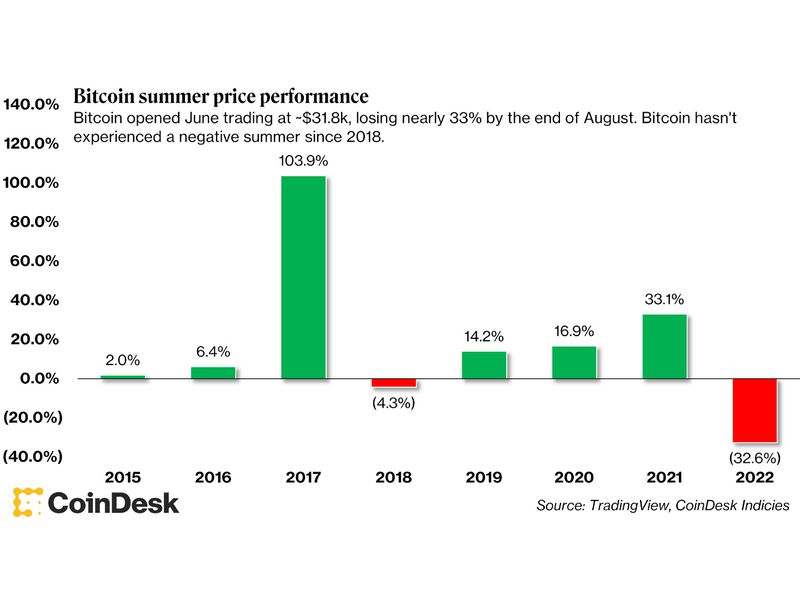 You could insert an advertisement for the disclaimer that “past performance is not indicative of future results,” but also, we knew that. The only thing these historical time frames have in common over the years is the time frame itself. But we’ll look at these time frames for some insight anyway, because Mr. Market is emotional, irrational (a dog-themed cryptocurrency is worth billions (there are actually two of them!)) and inefficient (if it weren’t, prices would never move).

Here are some truths: During the last two summers, BTC spot exchange volumes (the dollar value of bitcoin traded) were down about 43.5% in 2021 and about 14.0% in 2022 when compared to the preceding three months, respectively. Volumes were down in both comparable periods, but bitcoin’s price gained 33.1% in 2021 and lost 32.6% in 2022. So if the last two years are any indication, you can reasonably suggest that volumes are thinner in summer, but you probably wouldn’t suggest that it leads to a price increase or decrease.

As a disclaimer, the volume data comes from skew, which aggregated across seven trusted exchanges (Kraken, LMAX Digital, ItBit, Bitstamp, Gemini, Coinbase and FTX). As such, the absolute volume number is understated, but it works for comparison purposes.

If you then look forward to September, the same volume historically increases rather quickly. The spot exchange volumes in September were $10.7 billion and $51 billion for 2020 and 2021, respectively. Those values make up 38.9% and 42.7% of the preceding three months of volumes (not for nothing, there wasn’t a month-over-month volume increase between August and September in 2020). 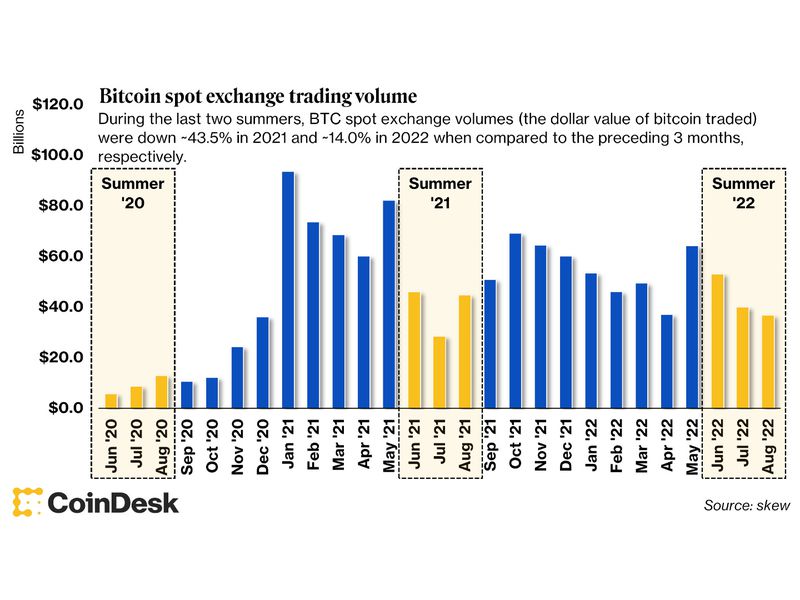 So you could reasonably expect trading volume to pick up, and it typically does in the fourth quarter anyway. But the real question is: At what price?

Well, if previous Septembers are any indication (which they aren’t), it is valuable to know that bitcoin’s price has decreased in September every year since 2017. So does that mean, after bitcoin performed so poorly this summer, it will be absolutely, tremendously down in September? 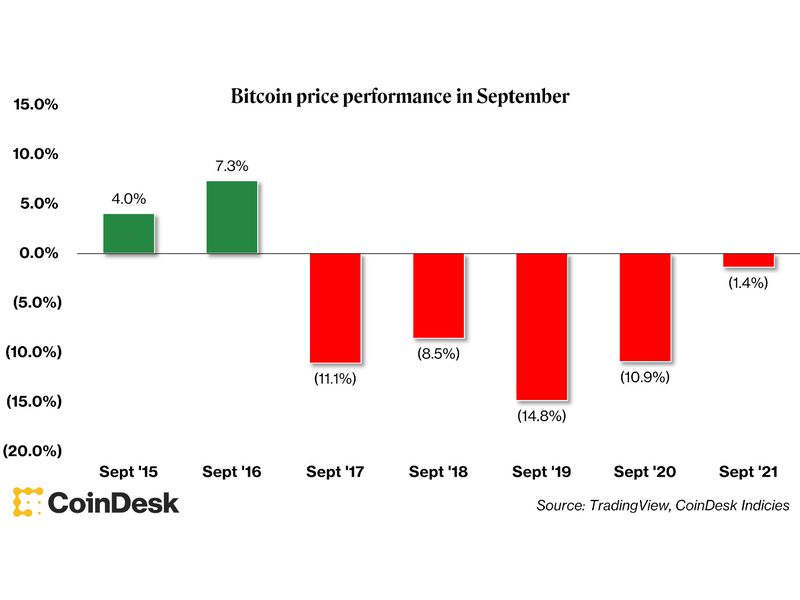 Who knows? See, the thing about looking at tangible metrics of price performance and volume over time periods is there is one critical item missing in those numbers.

Sure, the expected volume increase in September might exacerbate whatever narrative is the flavor of the month, but it doesn’t necessarily indicate that bitcoin’s price will definitely fall this September.

So, what is the narrative? These days, traders are paying close attention to the Merge. The Merge is not on Bitcoin (it is on Ethereum), but ether is the second most heavily traded cryptocurrency, so their price action is related. Whether the Merge will be bearish or bullish is up for debate.

Instead, here’s the cynical narrative my skeptical mind is paying attention to: What if the Merge isn’t as successful as anticipated or, worse yet, it breaks Ethereum? To me that means that either: a) Bitcoin will get dragged down as collateral damage as traders will trade all crypto assets like they’ve failed, b) traders will flood out of ETH to bitcoin since BTC doesn’t really make these sorts of wholesale technology updates and that’s good, or c) something in between.

Read more: Did Merge Optimism Lift Ether or Was It the S&P 500?

My bet is on c, but that’s because it’s easy to not be wrong if you hedge enough. In any event, we’ll be sure to revisit this at the end of September since that would mark the end of the third quarter and the start for the historically heavily traded fourth quarter. On top of that, the Merge will have been … merged … by then so there will be plenty to discuss around its degree of success.