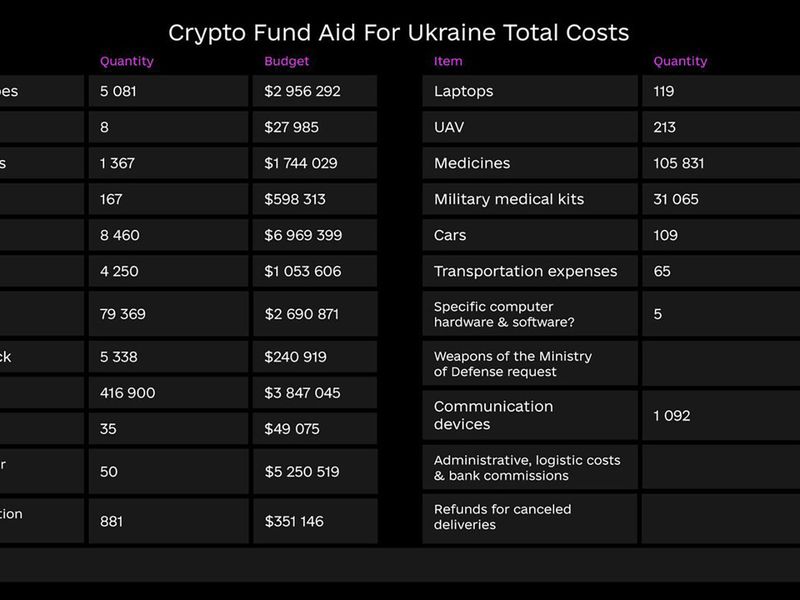 Ukraine’s government bought weapons, unmanned aerial vehicles (UAVs, better known as drones) and digital rifle scopes, besides non-lethal tools, with some of the $60 million in crypto donated after Russia invaded the European nation earlier this year, an official revealed in a new breakdown of expenditures.

Mykhailo Fedorov, Ukraine’s minister for Digital Transformation, tweeted the breakdown on Wednesday, which revealed the government had used some of the $54 million worth of funds raised via crypto to purchase lethal weapons and launch an English news platform. Another $6 million has yet to be spent.

Russia invaded Ukraine in February 2022, prompting the country to launch multiple donation drives in an effort to beef up its defenses and equipment using crypto in an unprecedented way.

Bornyakov told CoinDesk that more than $5 million spent on “weapons requested by the Ministry of Defence” were “lethal weapons.”

For war-time privacy, the Ministry has not shared what type of lethal weapons were bought using crypto, Bornyakov told CoinDesk.

“We don’t want to inform Russia which lethal weapons we are buying,” Bornyakov said.

It’s a sharp contrast to Ukraine’s original breakdown of how it spent its funds; officials had initially stated that it was using the crypto funds only to buy non-lethal equipment.

Dyma Budorin, CEO of Ukrainian startup Hacken, said the use of crypto to buy lethal weapons is “sensitive.” Hacken provides cyber security to crypto exchanges and has a collection of "hacktivists" attacking Russian institutions.

“If the fund is using crypto to buy lethal arms it should be clearly stated from day zero because this is very sensitive and people should know it,” Budorin said.

Patreon, a subscription platform for artists and creatives, has previously removed the Ukrainian non-profit “Come Back Alive” for using contributions to finance and train military personnel, a violation of the platform’s policy that doesn't allow it to be used for funding weapons or military activity.

The breakdown was also published by Minister Mykhailo Fedorov with the goal of increasing transparency and inspiring confidence in donors, an early commitment by the Ministry.

The spending accounts for $54 million out of the current $60 million raised by the Crypto Fund of Ukraine, while the remaining funds are still being spent, Bornyakov said.

“We aren’t going to give a list of every single thing we bought, but this is a start. We are still continuing to purchase night vision goggles and bulletproof vests. But we have started spending more on fighting the propaganda. This is new. We have also started spending on new Ukrainian media, United24, an English news platform,” Bornyakov told CoinDesk in a recent interview.

Field rations account for the highest category in terms of quantity. The country bought a total of 416,900 field rations through crypto donations.

Bornyakov has also previously said that “the crypto fund is being used to purchase non-lethal equipment for military purposes such as bulletproof vests, night vision goggles, military-grade food rations and medical equipment that helps with hemostasis such as tourniquets.”

The other major expenses in terms of quantity were medical. A total of 105,831 medicines and 31,065 military medical kits have been bought.