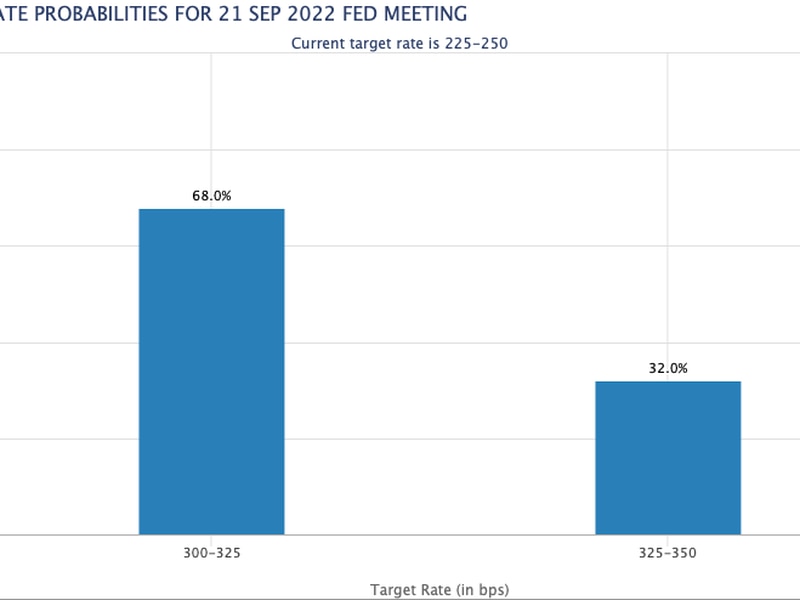 Traders on the Chicago Mercantile Exchange changed their outlook on the Federal Reserve's next interest rate decision dramatically overnight.

Speculation is mounting that the Federal Reserve may raise the official U.S. interest rate by a full percentage point for the first time since the early 1990s, reflecting the growing unease among traders and policymakers about unrelenting inflation. Just a month ago, traders were almost fully pricing in 50 basis points.

The concern in traditional markets has spilled over into cryptocurrencies, as seen in Tuesday’s 9.9% plunge in bitcoin's (BTC) price, its steepest drop in more than three weeks.

With August inflation numbers out hot on Tuesday, many economists have turned pessimistic on their economic outlook, and so did some traders, who now see a 32% chance of a full-percentage-point (100 basis points) rate hike by the Federal Reserve at its meeting next week – a magnitude that hasn’t happened since 1994. That is according to the CME FedWatch tool, which tracks bond traders' trades.

The Fed wants to see inflation running at a target rate of 2% annually. The U.S. consumer price index report showed that in August, prices were 8.3% higher than the year before, or about 6 percentage points above the target.

“Today’s CPI report confirms that the US has a serious inflation problem,” former Treasury Secretary Lawrence Summers tweeted Tuesday. “If I had to choose between 100 basis points in September and 50 basis points, I would choose 100 basis points move to reinforce credibility.”

Even though year-over-year inflation cooled to 8,3% in August from 8.5% in July, core inflation, which is more closely watched because it excludes volatile food and energy prices, rose 0.6% during the month, compared with an 0.3% increase during the month before.

“Markets capitulated on that reality, and we now are starting to understand that there is no `Fed pivot’ coming as traders were hopeful for in the short term,” Howard Greenberg, a cryptocurrency educator at Prosper Trading Academy, said.

“I will be watching the U.S. dollar index (DXY) closely leading into the Federal Open Market Committee (FOMC),” he said. “We had seen bitcoin rally as DXY cooled off last week but expect more downside if that breaks back above $110.50 as traders go more risk-off.”

The FOMC will be meeting next week, on Sep. 21-22, and is expected to raise its benchmark interest rate for a fifth consecutive time. The European Central Bank and the Bank of Canada both raised rates by 75 basis points this month.